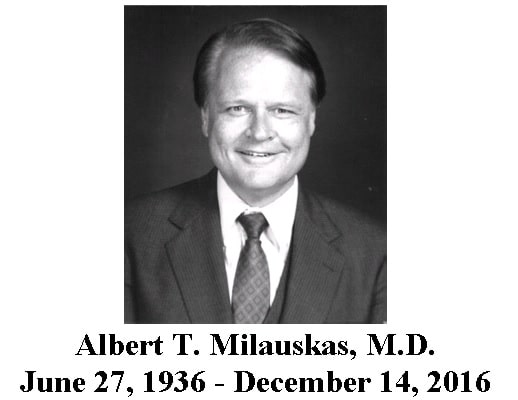 Albert Milauskas, beloved husband and father, passed away December 14, 2016 at age 80. Dr. Milauskas was born in Amsterdam, New York on June 27, 1936 to John and Malvina Milauskas, both immigrants from Lithuania.

Dr. Milauskas subsequently moved to Michigan where he attended the University of Detroit, Wayne State University School of Medicine and where he met his future wife of 54 years Dorothy.

Dr. Milauskas performed his residency as a physician at the prestigious Wilmer Eye Institute at the Johns Hopkins Hospital in Baltimore, MD. He later served for two years in the United State Public Health Service at the rank of Lt. Commander.

In 1970, he and his family moved to Palm Springs where he practiced ophthalmology for the next 46 years. In 1980 he founded the Milauskas Eye Institute which grew to four offices and a surgery center. He was a published medical author and gifted surgeon.

Dr. Milauskas loved to help those who had lost their vision and supported the Guide Dogs of the Desert for many years, as well as later serving as president of its board of directors.

He passed away peacefully with his wife and all four children beside him. He is survived by his wife Dorothy, sons Michael, Kevin and Timothy, daughter Elizabeth (Charleton) and grandson Charles Moore.

« Previous
Next »
Take our online Cataract self-test
Are you having the onset of cataracts? Trouble night driving?
Contact Us
Let Us Know How We Can Help!
Patient Portal
Ways to Pay
Request an Appointment
Our Locations
760-340-3937